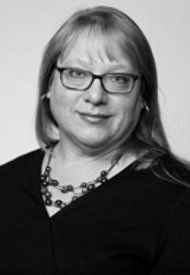 From mid-May to late June 2016 the Graduate School for East and Southeast European Studies welcomed the American anthropogeographer Prof. Elizabeth Cullen Dunn, Ph.D. as Visiting Research Fellow in Regensburg. Dunn is Associate Professor at the Department of Geography of Indiana University Bloomington since 2014. Her work focuses on the effects of large bureaucratic systems during periods of cataclysmic social change. She explores amongst others the effects of war or famine on the people in a given geographic region.

In 2004, Dunn published her first monography "Privatizing Poland: Baby Food, Big Business, and the Remaking of Labor". In this book she examines the fall of Communism in Eastern Europe as cataclysmic social change, using the example of a Polish company and its fate. Her attention turns especially to questions of power and hierarchy – between the corporation’s management and the workers but also between potential foreign importers and the industries of the former Eastern bloc countries.

Dunn’s current project focuses on the very up-to-date issue of humanitarianism and displacement, expulsion and uprooting. Between 2009 and 2012, she conducted a fieldwork in refugee camps in Georgia; the result of her study will be published in the forthcoming book "Unsettled: Humanitarianism and Displacement in the Republic of Georgia". Dunn recently wrote an article for the Science magazine, in which she analyzes and criticizes the system of humanitarian aid in the current refugee crisis. According to Dunn, there is no lack of financial means but of appropriate measures (Science, May 13, 2016). The German weekly newspaper "Die Zeit" mentioned this essay in May 2016.

Dunn, Elizabeth, and Michael Bobick. 2014. "The Empire Strikes Back: War Without War and Occupation Without Occupation in the Russian Sphere of Influence." American Ethnologist 41(3):405-413. (in Romanian translation, Platzforma, 2014)

Dunn, Elizabeth Cullen. 2014. "Notes Towards an Anthropology of Nothing: Humanitarianism and the Void in the Republic of Georgia” Slavic Review 73(2).

Dunn, Elizabeth Cullen. 2012. "The Chaos of Humanitarianism: Adhocracy in the Republic of Georgia" Humanity 3(1):1-23.