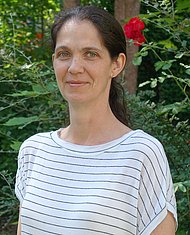 Caitlin Murdock is Professor of History at California State University, Long Beach and the director of the History Graduate program.In June and July 2018, she is a Visiting Research Fellow at the Graduate School in Regensburg. She received her B.A. from Swarthmore College, the M.A. from Emory University and her Ph.D. from Stanford University. Honors and awards include her stay as a Visiting Scholar at Max Planck Institute for the History of Science in Berlin (2010), her Leibnitz Summer Fellowship at the Zentrum für Zeithistorische Forschung in Potsdam (2009) and the American Council of Learned Societies Fellowship (2007-2008).

Her research focuses on German and Czech-speaking Central Europe in the nineteenth and twentieth centuries. Her first book, Changing Places: Society, Culture, and Territory in the Saxon-Bohemian Borderlands, 1870-1946 examines the changing dynamics of the Saxon-Bohemian borderlands between 1870 and 1946. She is currently working on a new project entitled Radiant Health: Radiation Exposure and the Politics of Public Health in Twentieth-Century Central Europe, which examines popular, scientific, and political debates about radiation and public health in Germany, Austria, and Czechoslovakia.

“Public Health in a Radioactive Age: Environmental Pollution, Popular Therapies, and Narratives of Danger in the Federal Republic of Germany, 1949-1970,” Central European History Vol 52 No 1 (2019). 45-64.

“Central Policy and Local Practice: the Changing Dynamics of the Saxon-Bohemian Borderlands after 1933,” Zeitschrift für Ostmitteleuropa-Forschung 53(2004) 2: 184-199.