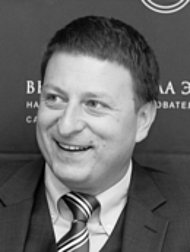 The Russian historian Prof. Alexander M. Semyonov, Ph.D. is from July to mid-August 2016 Visiting Research Fellow of the Graduate School for East and Southeast European Studies in Regensburg. He is professor of history at the History Department of the Higher School of Economics (HSE) in St. Petersburg and Co-Director of the international research project "Comparative Historical Studies of Empire and Nationalism". Professor Semyonov is also a co-founder and co-editor of the international scholarly journal Ab Imperio: Studies of New Imperial History and Nationalism in the Post Soviet Space.

Before that, Semyonov taught history and political science at St. Petersburg State University. He was also a Visiting Scholar at Columbia University (USA), Research Fellow at Rutgers University (USA) and at the Johannes Gutenberg University (Mainz, Germany). He taught Russian imperial history as associate visiting professor at the University of Michigan (Ann Arbor, USA) and University of Chicago (USA). He earned his Ph.D. 2006 at der Central European University in Budapest. Professor Semyonov is particularly interested in Intellectual History, the history of the Russian Empire, the history of parliamentarism in Russia, the history of empire, imperialism, and nationalism as well as comparative history.

During his stay at the Graduate School in Regensburg Semyonov will be working on two projects. The first one explores post-imperial political imagination of different political movements in the Russian Empire of the early 20th century and the way in which these imaginaries tackled the question of ethnic, religious and linguistic diversity of the imperial context. It seeks to explore the specific trajectory of the imperial transformation of the Russian Empire into the early Soviet federalism as compared to the outcome of the imperial collapse of the Habsburg and Ottoman empires. The second project deals with the Soviet foreign policy during the Perestroika years and is based on the diaries by Teymuraz Stepanov-Mamaladze. The project explores the interlinkages between domestic political climate and foreign policy dispositions and affections.

With Ilya Gerasimov/Jan Kusber (eds.): Empire Speaks Out: Languages of Rationalization and Self-Description in the Russian Empire, Leiden/Boston 2009.
Journal Articles and Book Chapters

The Real and Live Ethnographic Map of Russia: The Russian Empire in the Mirror of the State Duma, in: Ilya Gerasimov/Jan Kusber/Alexander Semyonov (eds.): Empire Speaks Out: Languages of Rationalization and Self-Description in the Russian Empire, Leiden/Boston 2009), pp. 191-228.