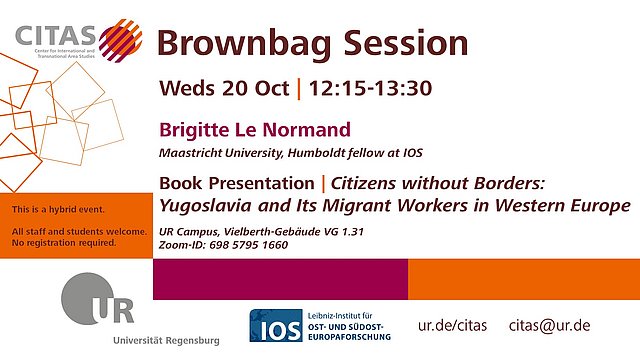 Citizens without Borders: Yugoslavia and its Migrant Workers in Western Europe (Hybrid)

Together with CITAS we are welcoming Brigitte LeNormand (Maastricht) to launch her new book "Citizens without Borders: Yugoslavia and its migrant workers in Western Europe", published in April 2021.

Among Eastern Europe’s postwar socialist states, Yugoslavia was unique in allowing its citizens to seek work abroad in Western Europe’s liberal democracies. This book charts the evolution of the relationship between Yugoslavia and its labour migrants who left to work in Western Europe in the 1960s and 1970s. It examines how migrants were perceived by policy-makers and social scientists and how they were portrayed in popular culture, including radio, newspapers, and cinema.
Read more here.

Brigitte Le Normand is an associate professor in the Department of History and Sociology at the University of British Columbia, Okanagan.