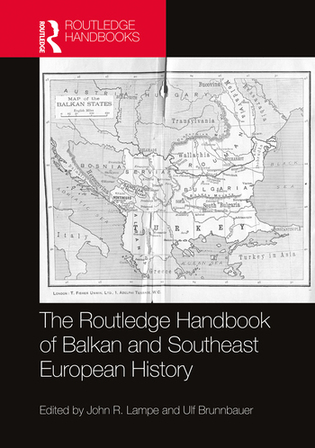 The Routledge Handbook of Balkan and Southeast European History

Disentangling a controversial history of turmoil and progress, this Handbook provides essential guidance through the complex past of a region that was previously known as the Balkans but is now better known as Southeastern Europe. It gathers 47 international scholars and researchers from the region. They stand back from the premodern claims and recent controversies stirred by the wars of Yugoslavia’s dissolution.

Parts I and II explore shifting early modern divisions among three empires to the national movements and independent states that intruded with Great Power intervention on Ottoman and Habsburg territory in the nineteenth century. Part III traces a full decade of war centered on the First World War, with forced migrations rivalling the great loss of life. Part IV addresses the interwar promise and the later authoritarian politics of five newly independent states: Albania, Bulgaria, Greece, Romania, and Yugoslavia. Separate attention is paid in Part V to the spread of European economic and social features that had begun in the nineteenth century. The Second World War again cost the region dearly in death and destruction and, as noted in Part VI, in interethnic violence. A final set of chapters in Part VII examines postwar and Cold War experiences that varied among the four Communist regimes as well as for non-Communist Greece. Lastly, a brief Epilogue takes the narrative past 1989 into the uncertainties that persist in Yugoslavia’s successor states and its neighbors.

Providing fresh analysis from recent scholarship, the brief and accessible chapters of the Handbook address the general reader as well as students and scholars. For further study, each chapter includes a short list of selected readings.

John R. Lampe is Emeritus Professor of History at the University of Maryland, College Park and Global Europe Fellow at the Woodrow Wilson International Center for Scholars, Washington, DC. He is the author of a dozen books, including two editions of both Balkans into Southeastern Europe and Yugoslavia as History: Twice There Was a Country.

Ulf Brunnbauer is Director of the Leibniz Institute for East and Southeast European Studies, Regensburg. He is also Professor of Southeast and East European History at the University of Regensburg. He is author and (co-)editor of more than twenty books, mostly on the history of Southeastern Europe since the nineteenth century, among them Globalizing Southeastern Europe: Emigrants, America and the State since the Late 19th Century (2016).

Guido Hausmann, Professor of Southeast and East European History (U Regensburg) and Head of the History Division of the Leibniz-Institute for East and Southeast European Studies.