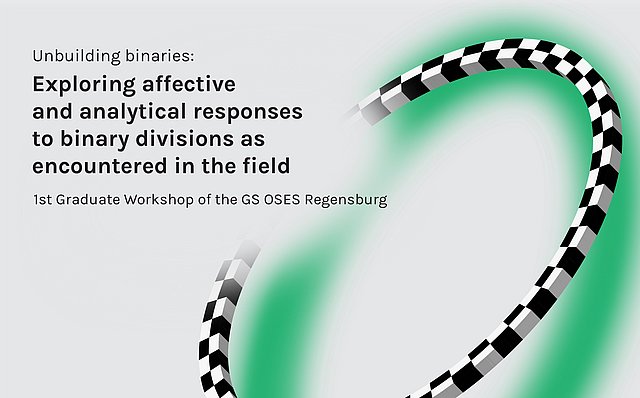 Unbuilding Binaries: Exploring affective and analytical responses to binary divisions as encountered in the field

1st Graduate Workshop of the GS OSES (UR)

The graduate workshop is dedicated to the unbuilding of persisting binaries in fieldwork and archival research with particular focus on the affective relationships of the researcher with the field.

The increasing number of theories on social complexity cannot protect the researcher from the fact that certain kinds of polarizations have gained momentum in the last years, as traditionalisms and nationalisms have been becoming stronger. It shows that something is wrong not only with the neoliberal order but also with prevalent theories as they clash with practices, including also research practices.

Discussions around social media have noted the emergence of echo-chambers, where we increasingly tend to communicate with like-minded people while vilifying all ‘others’ who think differently. The middle ground shrinks and antagonisms grow. This dynamic of polarization in contemporary societies is also created by reimposing the binaries that stem from the Enlightenment, based on the division between nature and culture. Even though they have been profoundly critiqued, they linger on in various related and persistent binaries, including gender (women being associated with nature and men with culture), geographical (East/West, North/South), and local/migrant divisions.

Scholars of diverse affiliations have pointed to the performative power of such binaries, criticizing the mechanisms of stigmatization and exclusion and proposing more sophisticated categories that take nuances, contradictions and ambiguities into account. Although some members of the research community may believe that these binaries are already blurred and overcome, for many of those who deal with contemporary society and with the past, the task of ‘unbuilding’ binaries, as encountered in the fieldwork and archival sources, is never finished as long as, for instance, the national community is considered to be ‘natural’. We as researchers have to deal with binaries over and over again, encompassing our implicit assumptions, despite our search for complexities.

This workshop seeks to problematize the process of blurring or dissolving binaries by focusing on the affective relationships we as researchers develop with our fieldwork topics or archival research by including our emotional and bodily responses to binaries in the analysis. To reflect on these relationships may be challenging and frustrating, especially in the context of various forms of intolerance, racism and traditionalist revival, which operate through binaries and further injustice and inequality. This frustration also becomes evident in efforts to deal with the past while the interpretation and representation of historical events is shaped by concerns of the respective present. Our proposition is: let’s think together on how the binaries trouble us and how to use our emotions of discouragement and frustration to do our work of unbuilding. Let’s discuss together the existing theoretical and practical ways of overcoming binaries, think of what criticisms we might offer and what new terms, theories/practices of complexity can be invented to rethink already established theories.
We invite contributions from history, anthropology, literature, sociology, political science, art history, cultural studies, political geography and any discipline within an Area Studies framework, addressing questions such as the following:

The graduate workshop aims to provide a productive forum for graduate students and early career researchers in particular.

For any questions and more information please contact gsoses.conference@ur.de.